Time management is one of the most discussed topics from self-help gurus. We’ve been told to make lists and get organized more times than I can count: use a calendar, use an app, use a monkey on your back that beats you when you forget to do something! I think that in the midst of the organizational chaos a more practical approach is needed. I come from a restaurant background in which I managed a quick-service restaurant with 80+ employees and grossing over $6 million per year. During that time I had a ton of moving parts to manage and no sit-down time to organize it all. I felt like my whole day was swamped and there was always something taking up my time, so I used a grid or a mental image to categorize things as they came my way.

Not everyone operates in the super-fast paced environment of a busy restaurant, but I would venture to say that every leader has had the proverbial “fire” come their way. When a member of your team comes to you with an unexpected problem it has the potential to derail even the most prepared routine. I mentioned the idea of a grid in which to view the items on your to-do list or the “fires” that pop up throughout your day. Named The Eisenhower grid, it was conceptualized by President Dwight D. Eisenhower and repackaged by Stephen Covey, author of “The 7 Habits of Highly Effective People.” Covey fames the Eisenhower Grid as a powerful tool for quickly deciding what you should do with a task. The grid breaks things down in four categories based on two factors: Importance and Urgency. Depending on where things fall is how you will determine what to do. 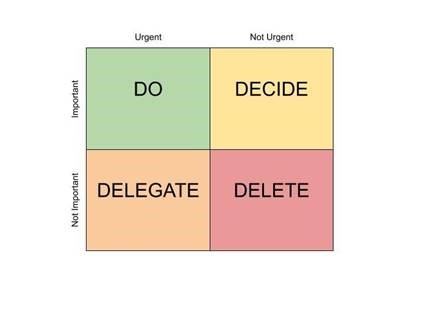 Top right is the Decide Box. These are the things that are not Urgent, but are still Important. Items in the Decide Box will quickly shift to the Do Box if you are not careful and diligent. Not exercising and eating healthy can turn into medical problems with a much higher sense of urgency. One you’re done with the Do, immediately start working on Decide. Here are some Decide Box items:

Bottom left is the Delegate Box. These items are Urgent, but not Important. This can be described with Charles Hummel’s phrase, “tyranny of the urgent.” These tend to be the things that other people bring to you wanting you to solve. In this case, however, you must let people solve their own problems. Give direction where you are able, but these are not the tasks for you to accomplish. This type of thing happens a lot in the restaurant setting: “Zach, we’re out of lemonade!” “I need more ice!” In those moments I know that I can look at my team members and remind them that this is their area of responsibility and that I need them to take care of it. Here’s some other examples:

Finally, on the bottom right is the Delete Box. These items are neither Important or Urgent. Avoid this box at all costs. This is where productivity and maturity go to die. We all want time to “zone out”, but unless you do it intentionally (probably as part of your Decide Box) then you are ultimately acting in a way that is detrimental to any other thing going on in your life. Here are some Delete Box things

Using the Eisenhower Grid doesn’t have to be a daunting task; it is actually meant to simplify your life. If you are agonizing about which box a task belongs in, you’re doing it wrong! This is simply meant to be a quick way to figure out how you should spend not only your time, but your mental energy as well. It’s okay to say no to things. It’s okay to say that one task is more important than another. Great freedom, productivity, and accomplishment can come from being very clear about how you structure your day.

This article was contributed by Zach Ferguson with Prosource Fitness Equipment as a part of the XCEL Committee's goal to provide regular, educational, posts for TAA's blog.

Local Boards and Committees have Vacancies and Need your Industry Knowledge!April 18, 2022 The Apartmentor 2022 Issue 1March 23, 2022