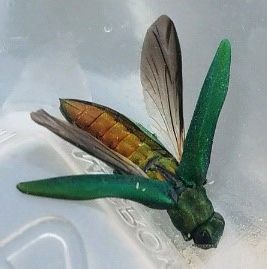 The Emerald Ash Borer (EAB) is a 1/2 inch metallic green beetle, recently found in North Carolina. This destructive beetle was first detected in the northern counties along the Virginia border and has already started wreaking havoc on Ash trees across the state.

Adult beetles lay eggs on the bark of Ash trees beginning in June. Once the eggs hatch, the larvae quickly thrive off the ash's living tree tissue located just under the bark. EAB larvae is a flat, segmented worm that tunnels through the living tissue feeding on the sugars the tree needs to survive. The tunnels zigzag around in an “S” shaped pattern.

When the larvae matures into a beetle it exits the tree making a small hole in the bark. The "D" exit hole is a sure confirmation of EAB. When enough of the vascular tissue is consumed, the tree starves, dehydrates, and dies. The EAB life cycle in northern climates is normally around 2 years due to cold weather. As infestation continues to move South the life cycle of EAB may accelerate.

The EAB beetle was first discovered in Michigan in 2002, it is believed to have been brought into the United States in shipping containers and/or wood pallets from Asia. EAB is now found in 35 states and Canada. The insect kills 97-99% of Ash trees it attacks and has killed over 100 million trees so far. In North Carolina, EAB has been confirmed in 37 counties. Greater Charlotte, Triad, and Triangle are included in these areas.

The NC Forest service estimates, 2% of NC trees are Ash. A mature forest will have around 150 trees per acre so around 3 Ash/acre. Ash trees do prefer to grow near rivers, creeks, and streams so not every property will have an Ash to worry about. A few properties in the right locations could be facing some difficult decision. Reference ash indicators on page 4 to spot an ash tree.

Treat ash with an insecticidal treatment before an EAB attack.

The treatment should begin when the infestation is within 20 miles of the tree's location and performed on the recommended schedule. Treatment should continue as long as EAB is a threat.

EAB kills 97 - 99% of unprotected ash it attacks; unfortunately, treatment will not cure an already infested Ash but may slow decline.

Step 1: Identify Ash on your property.

The branches and twigs form a cross where they join each limb. Other hardwoods have alternate branches and twigs which are staggered along the limbs. Maples and Dogwood are the other opposite branching trees in our area but are familiar to most of us and easily ruled out as ash. 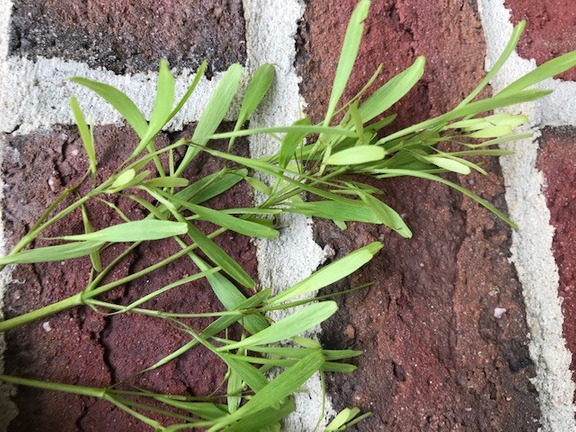 The leaves of Ash are compound, meaning they have multiple leaflets on the same petiole or stem (5-12 leaflets depending on what type of Ash). They are similar to Pecan and Walnut leaves, but remember Ash has opposite branching. Ash seeds are straight and have wings on both sides, they resemble an elongated canoe paddle.

Bark of an Ash is vertically grooved in a crosshatch pattern although some will have a checked pattern like a Dogwood or Persimmon. The bark color varies from light to medium grey.

Trees that are a threat to people, buildings or property should be prioritized first. Of those, the trees that are least accessible go to the top of the list.

EAB is fast moving and aggressive.

Currently, the number 1 cause of fatality in the tree industry is due to whole tree failure. Tree companies around the US have implemented Do Not Climb policies to ensure safe job conditions when working with EAB infested Ash. In order to remove an infested Ash tree safely, an arborist must fell the tree if room allows, or use heavy equipment. The use of heavy equipment such as a crane can double or triple job costs.

Once a property has been inspected, and prioritized, a plan can be formulated. Bids may be obtained for prevention or removal and budgets can be adjusted as needed, working with a certified Arborist is key.
Inspect. Prevent. Prioritize. Plan.

This article was written by Rick Pearce, Certified Arborist #SO-1773A, with Carolina Tree Care. It was adapted and reposted with permission. The original post can be found here.